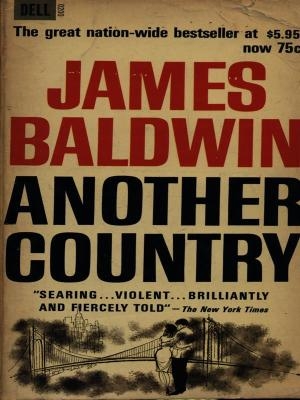 “Love was a country he knew nothing about.”

James Baldwin’s Another country remains a “country” people know almost nothing about so far. This country mixes such a wide range of problems people have been facing since Baldwin’s times until the present moment. But what if it is simply the other side of prosperous America, where racial problems, problems of sexual minorities, family problems, finding oneself questions still turn around? The novel inwardly puts into shivering, hence deserves to be marked as an admirable guide to the backstreets of dark souls of humans and society they live in.

There is simply an American society of 1960s shown through the prism of taboo themes by the Afro-American writer, which in turn seems to be so obnoxious. Although it is 21st century now, the novel acquaints us with people so similar to us and their life problems appear to be the same in spite of the fact more than a half century passed. These people are not very happy; their lives fail, and they look for things everyone else is looking for: ways to escape from loneliness, to find understanding, and some crumbs of love.

The Baldwin’s novel is a poetic exploration of reality he lived in. The sharp racial issue of the time is multiplied with the issue of same-sex relationships. Nevertheless, Baldwin’s main idea is to shed light into human relationships and its central quintessence – love. The white-skinned and immersed in the black community Vivaldo says that love is the country of which he knows nothing (Baldwin, 1993, p.250).

This is precisely another country that is equally unfamiliar to most, regardless of color and sex orientation. Moreover, what else if not an interaction makes a person face real himself? Rufus, Eric, Vivaldo, Ida and the others try to realize who they are in love. Thus, they try to find a life path. New York, jazz, art, filth and smoke take them around the understanding of who they really are. The author tries to lead us to the most important inspiration that no one is free until everyone is free. And it is possible to reach through love and accepting others.

In addition to these metaphysical assumptions, the novel shows a real different world: a dysfunctional Harlem, squalid flats, bars full of dubious public. It puts challenges to traditional society by its very existence! Nevertheless, Baldwin writes out the precise social background. The writer socially analyses the living conditions of the characters, their environment, and tries to show a variety of communication between the individual and society. He explores the conditionality of a character development under social circumstances.

Even though the novel stays incomprehensible by many because of the chaotic relationships of characters and its dark social reality, it hides a deep inner meaning. It reflects the author's concern for the future of American society, his inner disgust of being a part of the people who make him suffer. “Some days, honey, I wish I could turn myself into one big fist and grind this miserable country to powder. Some days, I don’t believe it has a right to exist” (Baldwin, 1993, p.350). American society changed since those times, but the novel once and again brings to life the issues actualizing those sharp problems.

Another country is like a doom jazz song. Feelings after reading the novel are ambiguous and contradictory. The world of Baldwin’s novel is flecked with grayish veil of sadness and detachment, and in a moment there may raise an intention to put the book aside, take a shower and never go back to works of this type. However, life itself is contradictory and multifaceted. It always has the other side, sometimes a gross side of being. Nevertheless, Another country by James Baldwin represents the heroes who do not allow trampling human dignity; who fight for the right to express their identities, for the triumph of life. It fully deserves to be read and understood.